Day 7 of 44 Days of Witchcraft: The Element of Air

The Element of Air. I've always loved a good, windy day......especially when it's chilly and grey outside. I confess, I'm very much a story-book Witch in that I would love to live in a big, spooky house where it was always windy and dismal out. It's not that I don't like the occasional sunny day, because I do, but in general I'm quite bookish and prefer to snuggle under a blanket with a good book, than I do prancing about outdoors. Also, the bright sun hurts my eyes, so clouds and wind are easier on me.

Anyway, I digress. A gentle breeze is fun, but living in the South, I've also seen the darker side of Air. Tornadoes are of great frequency in Texas, where I live, and last year I personally saw one as it tore through my city. Fortunately, nobody was killed, but other places weren't so lucky and suffered massive death and destruction. Of course, tornadoes (and nothing in nature, for that matter) are not "evil;" they just ARE, though at times they can appear "bad" because of how they impact humanity. Indeed, I think tornadoes have a kind of haunting beauty, and I would very much like to be involved in one of those "storm chases" as long as I felt I was with trained people who could guarantee a reasonable amount of safety. I'm actually pretty scared of storms, though, and would probably freak out!

Anyway, for my picture of "Air" I thought I'd do a tornado. This is the tornado I saw which I mentioned earlier, though I did NOT take this picture myself. I would only see the top part of the funnel from my vantage point. 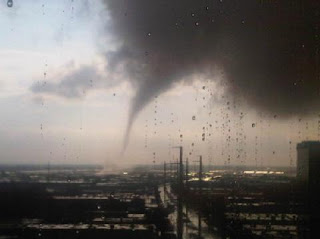