The Hawthorn and the Blackberry 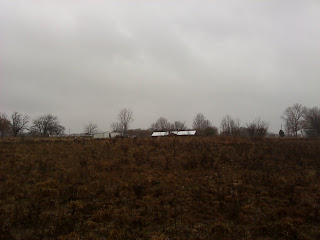 This weekend, I've gone to visit my aunt. She lives "out in the country" as we say; that is, in a rural area. We used to spend a lot of our summers here as children, and the place has many fond memories for me. As an adult, and especially as a Witch, I don't think that I get to spend nearly as much time out in Nature as I would like to or is good for me.

My aunt is really awesome. She grows a lot of her own food, and she makes the best pickles and hot sauce ever. They live on a large-ish piece of land, so they've got room for a huge garden, fruit trees, and a big pasture full of native grasses, trees, and blackberries. On this trip, I was meant to come and help prune the apple, almond, and peach trees, and was going to be given the wood to take home with me. I may have mentioned, I want to start my own little mail order Witch shop, and the wood would be excellent for making wands. Alas, though, it's been pouring rain almost since I arrived, and thus isn't really good working outside weather. However, while chatting about trees, I told my aunt that my favourite was the Hawthorn, and told her about my desire to make Hawthorn jam. To my surprise, when I described the tree, she suddenly said, "That sounds like something we've got growing out back!" Apparently, they've had a mystery tree out in the pasture for 30 years. They never knew what it was, and almost cut it down. (Needless to say, they won't be cutting it down now....they're delighted to have such a tasty and useful tree nearby!) 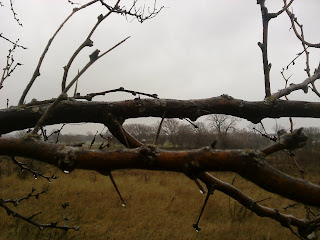 So, despite the rain, I had to go check and see if it was indeed a Hawthorn. I put on some old boots and a heavy grey cape, opened my umbrella, and set off. Sure enough, when I arrived at the tree, it was immediately obvious: it was a Hawthorn all right. Not only that, but I spotted another, smaller one about 30 feet away. The smaller one is too small to cut anything from, but the big one certainly isn't, and I'm going to be harvesting some wood before I go home. 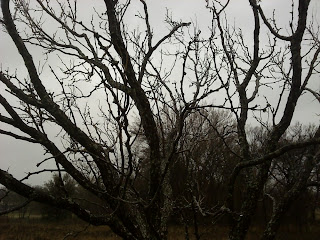 I tramped about in the field some more before coming inside, and had a peek at the blackberry patch. I've been wanting to make a Witch's whisk from the dried blackberry stalks, so I'm going to be harvesting some tomorrow for that. There may be a few more useful herbs and such that I can find; I'm just hoping it dries out a wee bit so I can search without sinking into the mud! 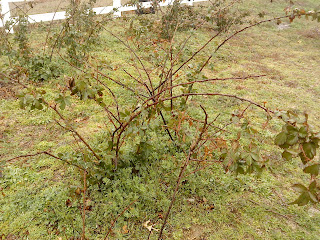 Right now, I am sitting in front of a roasting fire and having a very nice day. It's definitely been a great weekend, and it's been lovely to catch up with my family and spend some time out in Nature. 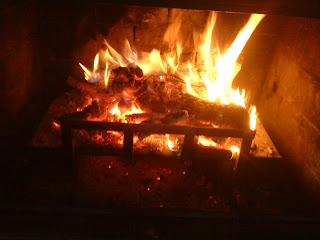