I finally broke down and ordered myself a brand-new cauldron. I already had a little one, which I used as an incense burner, and to burn spell papers, but it wasn't food safe and looked a little on the cheap side. In general, I don't buy things from "witch shops" because they tend to be overpriced and poor quality, and the last thing you want with your magical tools is to have the same thing that everybody else has. So, the cauldron I bought came, not from a witch shop, but from a small company which sells them largely for outdoor cooking and country living.

I had a wide number of choices when it came to selecting one. I wanted it to be big, large enough that I could actually cook up a big batch of soup or stew if I went camping, and big enough that I could burn things in it, or use it for scrying. On the other hand, I didn't want it to be TOO big, as I have a small apartment and health issues prevent me from picking up anything too heavy or bulky. The kind of pot I settled on is actually called a "pojtie pot" and is heavily used in South Africa as a cooking pot. They are numbered by size, with a "1" being the smallest, and going all the way up to "20" or even higher. I decided on a "4" which will hold 10 quarts, or 2.5 gallons. I got it for a pretty good price, but shipping added on another 30 bucks because it was so heavy.

It arrived on Tuesday of this week. I heard an ominous rattling coming from the box, and was concerned because the box looked like it had been through a tornado. I think the UPS people hate me, because most of the packages that arrive looks as though they've been almost deliberately mistreated. When I order something expensive, I almost always get insurance on it because of how badly mistreated most of my mail seems to be. Anyway, I brought it inside and opened it up, and found that the rattling was simply the lid rattling against the pot (they were packed separately in the box.) When I got everything out, I was surprised; I was afraid before it came that maybe I should have gotten a bigger one, but when I actually saw it I was shocked at how big and heavy it really was. It's covered in little bits of white packing material, which is something I will have to clean off. I really, really like my new cauldron, as it's obviously high quality and is 100% food safe.

Now I just have to season it. Cast iron must be seasoned with a protective coating before use. You can use lard, or vegetable oil, but I have decided on Crisco because it's cheap, easy to handle, and non-animal derived. You have to rub the whole pot and lid down with it, and then bake it in the oven for a few hours. Now, the pot is big and heavy, heavier than I imagined, so I am hoping I can get it in there and out again without any problem Once it's down, the cauldron will find a place alongside my working space/altar, until I am ready to go someplace and cook something in it. Because I am pretty practical with my Witchcraft, I see no problem in using it for both ritual, and cooking, uses though obviously I won't be able to use it for any baneful herbs. I like my new pot SO much, in fact, that I am going to be ordering another, smaller one without any legs so I can cook with it on my gas stovetop. I will also be ordering a tripod and chain so I can suspend my cauldron over an open fire when I am using it out of doors.

Here are some pictures. They are bad quality, as I took them on the spur of the moment with my cell phone, but I will post better ones later. The little white flecks you see are bits of packing material; I am going to be cleaning them off today as I prepare to season the pot. 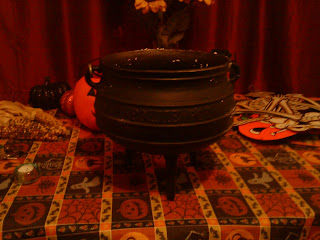 Without the lid. You can see my taken-down Halloween decorations on the table 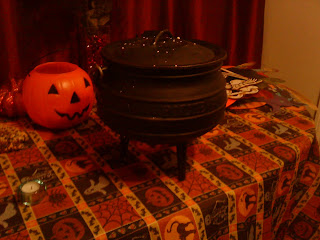 With the lid. The lid has a deep rim to allow hot coals to be heaped on top. 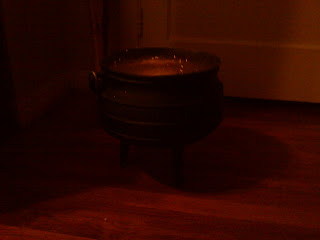 On the floor, with a burning candle within.
Posted by H.A. Blackthorn at 4:54 AM