Today, I had my first real experience in seasoning cast iron. I wrote last week about getting my beautiful new cast iron cauldron, but I hadn't gotten around to seasoning it until today. I tried putting it into a cold oven to see if it would fit, and it did.....but only barely. So, I had to get a friend to come over and give me a hand, because it was too heavy for me to pick up on my own.

When I purchased my cauldron, the seller sent along a few booklets that told me how to season it. One said one thing, and the other something slightly different, so I sort of averaged it out. First, we gave the inside and the outside of the cauldron a good washing. Then, we dried it out and put it in a warm oven for a bit to make sure all moisture was gone, and to "open the pores" so to speak. Next, we gave the entire thing a rubdown with Crisco. You can use various vegetable oils, or lard, but I settled on Crisco as being easiest and most shelf-stable. Lastly, we put it in the oven, bottom up, and cooked it at 300 degrees for about an hour and a half. I opened all the doors and windows, having been told that the seasoning process would smell and would cause smoke, but it really wasn't that bad.

When the time was up, we opened the oven door and turned off the heat, and waited a bit until the pot cooled down (which takes a fair while with cast iron.) We took it out of the oven, and I was pleased to see that the cauldron had turned a beautiful shade of rich, almost glossy, black. As the metal cools, the vegetable shortening will form a protective coating that will protect the cast iron from rust and from the acids of the foods being cooked, and will also help to keep the iron in good shape and prevent brittleness. I'm hoping to have my cauldron for a good, long while so I'm happy to spend the time NOW to ensure it lasts.

Here's a few pics of the seasoning process. You can see it greased up, the Crisco I used, and the final result (I put the hot pads beneath the legs so it wouldn't burn the floor.) 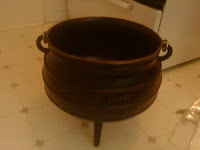 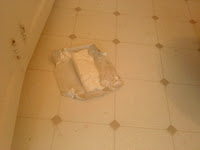 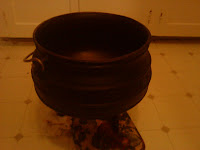