It's been rainy, dark, and chilly here all week which of course has meant some time spent indoors. Yesterday, while my housemate was away, I decided  to make a cup of tea as I needed a bit of a pick-me-up. So, I headed down towards the kitchen. I'm still not entirely sure what happened, but about 4-5 steps up from the first floor something went wrong and I fell down the stairs. I have a memory of feeling "nothing" beneath my feet, and the next thing I knew I was laying on my right side on the hardwood floor. I knew immediately that I was injured; my right leg and left foot were in a lot of pain, and my right arm was hurting from where I had landed on it. My cell phone had come out of my pocket, went flying, and smashed to bits on the floor. I managed to get up, gather the pieces, and hopped back up to my bedroom in a daze.

At first I thought that maybe I'd just bruised something, but my right foot was very tender and as the hours went on it began to swell. I had a very rough night and got little sleep because the pain has continued to worsen. When my housemate wakes up  he's going to take my to the ER for x-rays.  I probably should have gone last night, but I did not fancy waiting hours in the lobby for a doctor and anyway, I didn't realize it was as bad as it was. I'm afraid my right foot may be broken; at the very least, it's extremely painful and I am not able to put any weight on it at all. This could not have come at a worse time; Hallowe'en is my favourite holiday, this is my first autumn season in my new Pacific Northwest home, and I have a Hallowe'en party scheduled at home in a bit over a week. While I'm very grateful that I wasn't hurt worse or even killed by my fall (and it was a pretty long one) I'm also angry at myself for managing to fall down the stairs in the first place. I put my phone back together, and though it still works it's going to have to be replaced.

So, I hope all of my readers will send me healing thoughts. I simply cannot bear to be  unable to walk, and I'm hoping the doctors will be able to put my right pretty quickly. I'll update this once I get back from the hospital and get an accurate diagnosis.

Update: I've been to the emergency room and back. After some x-rays they determined that I did not break any bones. However, I've sprained my foot and ankle rather badly.  I have to wear a special boot brace and be on crutches for a few weeks at least. Apparently, a sprain in this area can hurt even more than a break. I'm keeping my fingers crossed that I heal up quickly. 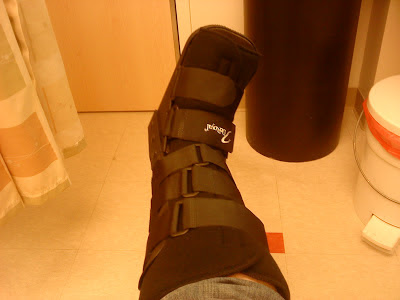