Crystals! And Some New Seeds

Yesterday, I went to my favourite gardening store (Nicholson Hardie) and bought some new crystals, as well as some seeds. Their crystal selection isn't the best but they are inexpensive and it's easy to buy a bunch of them.

A lot of Traditional Witches seem to have the strange idea that crystals are a "New Age fad" and have no place in Witchcraft, but this couldn't be further from the truth. In fact, from ancient times various rocks and gems were used for their healing and other magical powers. Yes, a lot of New Age type people use them as well, but it doesn't mean they're not a valid, useful tool. I think it's important to not toss the baby out with the bathwater, and refuse to use entire areas of magical knowledge solely as part of some backlash against "fluffy" ideas.

Anyway, I picked up some Citrine, some Quartz, a Rose Quartz, a couple of Amethyst clusters, and some Green Citrine. Here's a pic, sorry for the poor quality, I had to use my cell phone. 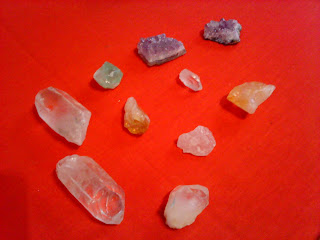 I also picked up some seeds; Moonflowers, little Evening Sun mix Sunflowers, and some Catnip. Today, I'm going to head to the hardware store to pick up some pots and a trellis. It's a little too early right now to plant, but it should be safe enough in the next couple of weeks. Last year was my first garden, so this year I'm feeling a lot older and wiser.

I'll try to post pics of the rest of my crystal collection. Most of them are tumbled stones, but I'm always adding to it.
Posted by H.A. Blackthorn at 9:16 AM