Those that know me know how much I love wood (!) of all kinds, especially as it pertains to the magical arts. I'm lucky in that the area I live in, though a large city, has lots and lots of trees and botanical gardens for me to enjoy and there are several large parks almost within walking distance. Be that as it may, when it comes to crafting magical tools, I am largely out of luck. Not only do I lack the skill (which I do, to be honest) but also, though trees abound, I cannot simply go up and chop a branch off one one of them to make a wand or staff. So, like many Witches, I buy most of my tools.

Now, before I get tarred and feathered, I will say this: I only buy custom-made, hand-crafted stuff. Maybe I don't actually make it, but I design it, more or less, so there's still something of "me" in it. Now, where all this is going is here: up until now, I've usually stuck with the "traditional" woods used for these purposes, but I feel like branching (ha!) out. The issue is, most of these traditional woods are English and do not grow in Texas, much less in Dallas. While we do have Ash, and Oak, we don't have Hazel, Rowan, Hawthorn, or any of the other commonly used wand/staff woods. Since the guys I order from have access to a large variety, I've been able to get these woods anyway; I have a Hazel wand, a Rowan wand, and a Blackthorn blasting rod. This is all well and good, but since much of Witchcraft is working with the land around you, it doesn't make sense to me that I would use tools made from things that only grow thousands of miles away. As such, I'm starting to want to use local trees or at least woods that are indigenous to my area.

Now, this is where the branching out pun came from. I'm going to have to experiment with the local woods and trees to find out what works for me, and what doesn't. There isn't as much lore on the Maple, for example, as for some of the other woods, and yet my street is literally lined with them. I read somewhere that the Maple tree is associated with the Great Horned Owl, which is a kind of totem of mine; the owl being a symbol of Magic, witches and wizards, secrets, and knowledge. I've also come to associated them with the Horned God, because like Him they change with the seasons and suffer a kind of "death" in the winter, only to be reborn again over, and over, and over in an endless cycle (the Maple can live a very, very long time.) So, Maple's a wood I'd like to work with in the near future. Likewise, the Oak is another one which is both traditional, AND local. I happened upon an Oak branch lying on the road the other day, while I was out on a walk. I picked it up and carried it home with me, and felt like it had a really good energy. So, I talked to one of my craftspeople, and had them make for me a wand of Red Oak, embellished with real silver and a Quartz crystal point. I just got it today and absolutely love it. It's got a very powerful, ancient feel to it, and a very masculine one. Here's what it looks like: 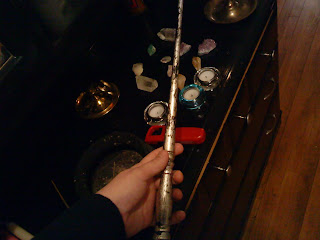 Yep, that's real silver grafted on there (not paint.) And here's a pic of the beautiful Quartz crystal point : 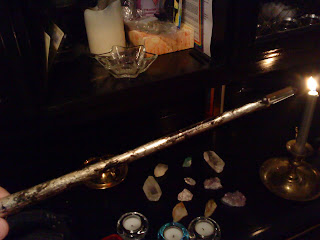 My worktable isn't at all messy, no sir.

Anyway, I'm hoping this kind of experimentation will be the start of a more self-sufficient me. Don't get me wrong, I try to walk the walk, but I think sometimes I rely too much on books and history, and not enough on my own intuition, when it comes to my practice. Now that the weather's nice, I hope to spend more time out in Nature and less time cooped up inside. My health was pretty bad this winter, but I tend to feel better in the warmer months and there's nothing I like better than gardening, so I hope that will give me the incentive I need to get out more.
Posted by H.A. Blackthorn at 6:41 PM