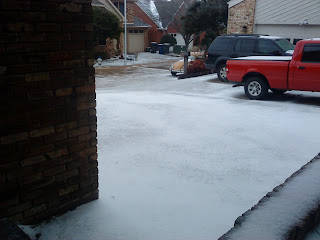 Yesterday, it was 75 degrees. Right now, it's 20! The news kept saying we were going to get severe winter weather, but they always say that and it never happens. Not so today. Wouldn't you know, I had to be up at 4am for work and found that there was a howling ice storm going on outside. I knew I shouldn't get out in it, but I didn't have a choice. We had to shut down and go home early because of the weather, but I ran to the store first (it's right next to where I work) and picked up some soups and cheeses.

I'm actually taking care of a house while somebody is away, and it's at the top of a hill with a very steep driveway. When I got back after the store, the car wouldn't go up the driveway because it was too slippery, so I had to park on the street and battle my way up there. To go back down to get the rest of the groceries, I had to sit on my rump and slide down the hill! At the time, though, there was still some crunchy sleet with a little bit of traction. NOW, it's frozen solid and the entire world, as far as I can see, is one bit sheet of shiny, slippery ice. 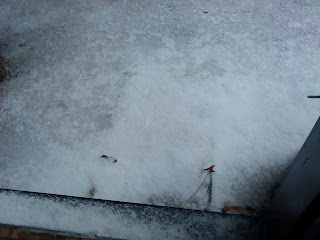 I'm literally trapped inside. I don't dare slide down the hill again because I don't think I could get back up. I have food and tea and snacks, but I'm guessing it's going to get boring stuck in one house like this. I'll post some pics to show y'all what it looks like outside. Sorry about the quality; they're from my phone, and one I had to take through a window screen. 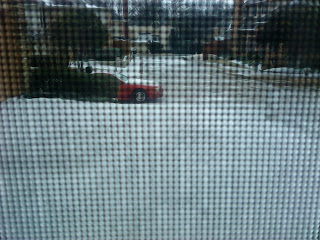